by Chris Le'John 10 years ago9 years ago

So you are stranded on a desolate island that is supposed to be kind of “dangerous” despite being cute at the same time. In this new creature catching civ-management game from Kairosoft you will be doing lots of taming, skewering and overall being a bad-ass amongst a wild variety of “beasties” while developing your island into who-knows-what you want it to actually be. Now I’m not going to say this game was a mistake, it’s just that the concept is not very unique. Who sat down and thought “hey, this would be really cool, listen. You know how Pokemon is all catch-em-all? Yea, lets do that but instead..let’s make it a city management game too! Because you know, we are Kairosoft.”

You start out with a small patch of land on a deserted island, with other areas opening up to exploration as you progress. The exploration aspect is just a matter of moving through a few random encounters (much like the ones you annoyingly come across in Pokemon games) with up to three beasts you’ve captured at your side, but these battles require some thought in order to be won, I know that sounds like work. You can attack enemies, go defensive or use items and auras that will restore your overall health or improve your abilities. It won’t be long before losing becomes a very real possibility. Even the loss of a single ally in battle can be costly, since beasts who are knocked out before a fight is over do not gain experience for the encounter, which hinders their advancement. Just like Pokemon.

The graphics and controls are exactly what you would expect from a Kairosoft title. There is really nothing special in here on that front. The clunky but passable UI is pretty much the same. The same drag and drop tile layout is still here and with that one I don’t think they could have pulled any of their games off without that style anyway. I guess when it comes to trademark, Kairosoft pretty much sums up the word. The only differences in their releases since the wildly popular Game Dev Story has been the genre. The overall gameplay gets really old really fast and with their obvious ‘save the best for last’ strategy it won’t be long before you start seeing sequels to whatever managed to get decent reviews. 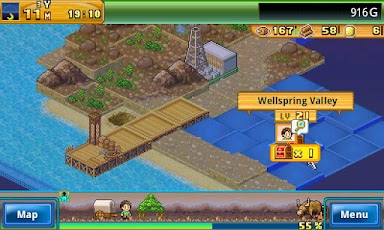 Sure Beastie Bay resembles the Pokemon series but what are you going to do? At this point at least anyone making the effort to bring new material to the table isn’t immediately shunned since there wasn’t much else out anyway. Fortunately for Kairosoft and for the fan base, Beastie Bay offers up some variation to the otherwise worn formula that’s been plaguing the market lately. Ultimately you might need to just let your preferences decide for you here. Recommending it would be just plain wrong though and the price is steep for a little bundle of temporary joy. Frankly I think the developers need a reality check. As if poorly translated games with repetitive tendencies wasn’t obvious enough