Starcraft 2: Wings of Liberty quickly became one of the most popular RTS games in history, as well as a huge platform for competitive gaming. This set the stage for Starcraft 2’s second installment, Heart of the Swarm. With as huge a following that Starcraft has as both a story, as well as an eSport, HotS needed to be a huge success, and quite frankly, it was.

From a campaign point of view, HotS is everything players have come to expect from Blizzard’s RTS campaigns. Players follow Sarah Kerrigan, as she seeks revenge on Emperor Mengsk. Though new characters are introduced through out the campaign, players are still joined by the characters they fell in love with in Wings of Liberty, as well as appearances from some characters from the original Starcraft. The missions were well done, though some reminded me a little too much of missions I have done in pervious Blizzard games. This is not a huge deal though, as there are plenty of new feelings to the missions. The game does do a great job of giving players insight into how the Swarm operates, something I was worried would not work as well as it did with Terran in Wings. Instead of giving players “research” options to enhance their army, they allowed players to choose new “evolutions” for their army, something that works much better with the Zerg and makes the game overall feel better.

The best part of the campaign though is the cutscenes between missions. Blizzard has long been known for their cinematic-making ability, and HotS continues this tradition. From the action-packed cinematic that starts the campaign, to the ending one, which is designed to excite players for the third chapter, every cinematic is well done and helps enrich the story. The only complaint I had with this aspect of the game was some of the interactions between characters were kind of cheesy, making it slightly harder to take the cut scenes seriously. However, this is to be expected, as Blizzard is well known for their often cheesy character lines.

Though the campaign is great, it is only half of the game, yet the multiplayer is just as good. Blizzard completely revamped the user interface, making it much easier to navigate. They also added a number of features to improve the social aspect of the game, including the ability for players to create and join clans and groups. A new unranked match making system was also implemented, allowing players to practice without the fear of losing ladder points. Finally, a new leveling system has been implemented, allowing players to earn new rewards for playing with each race. All of these changes will certainly help the game grow as an eSport, as well as make it more enjoyable for everyday players to play.

Finally, the biggest positive that this expansion brings to Starcraft is the new units. Blizzard did a great job of adding units that will certainly change what was turing into a pretty stale meta-game in competitive play. Furthermore, they only added a few new units. This is great because, while still making the game fresh, it does not completely change it. 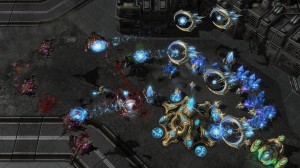 Complaints of this game are few and far between. Certainly, the cheesiness of some parts of the campaign is worth noting again, but like it was said earlier, this is expected from Blizzard. At launch, there were some bugs with the leveling system, but there was nothing else that was terrible with the launch. Keeping in mind how Diablo 3 went, this launch, though not perfect, was very smooth. Balance may be an issue, yet it is far too soon to tell whether any of the new units are “broken” in multiplayer. Overall, however, Heart of the Swarm is a great expansion for the already massive RTS series and looks to only make it an even better game.