To ask for war as a solution to turbulent and chaotic times can only be a fool’s dream. We are talking about millions of lives being put on the line who would be fighting the battles for us, while we sit back in our cosy couches bleeding patriotism (read: jingoism) by the edge of our keyboards. War can never be an answer to troubled times, yes! However, not all wars have to mean bloodshed and gore. Some can also bring families together in joyous unions. By now, the article must seem antithetical to the whole idea of war doing more harm than good, and it must have gotten you thinking. But, fret not! We are only talking about nerf wars and nerf guns. If you are a parent or a caregiver to a young one, you might already be oriented with what nerf guns are and what they are used for. Kids love them, and at times, adults too. However, if you stumbled upon this article during a random search expedition, let us introduce you to the concept and bring you great ideas of using nerf guns that you can think of for the next family get together.

What Is So Fun About Nerf Guns?

It all started in 1969 when the first nerf ball was invented, and since then it snowballed into a gigantic game much loved by children and adults alike. Nerf is an acronym for ‘Non-Expanding Recreational Foam” because the pop coloured ammunitions used with the gun are made of foam. The guns, also known as blasters, are quite light in its weight, which makes it easy for children to handle. Handling nerf guns is usually considered to be safe; however, there are certain safety rules that every game entails. For instance, while handling a nerf gun, one should never look down the barrel and use only nerf darts. Any other kind of darts has the potential to go awry. Also, only play where it is safe and use safety glasses to protect your eyes.

What Are Nerf Wars?

Nerf wars are the only kind of wars that can get a family together. Even video games eulogising wars and battles have the potential of instigating juvenile delinquency. However, nerf wars are good old family games that are safe and fun at the same time. Nerf wars do not involve stringent rules. However, there is always room for improvisation and organised game battles. You can never run out of creativity and experimentation with this game. Nerf wars are mostly impromptu but can also be planned before if you are doing it on a grand scale. You can never run out of ideas or fun with a nerf battle.

The 5 Nerf Guns That Never Goes Out of Style:

Now that we have covered the origin, history and other details about nerf guns and nerf wars, we must turn our attention towards nerf guns that you can always count on. To be able to make the most fun out of a nerf battle and gain an advantage over your opposing team, you need the right arsenals at your disposal. The guns discussed in this segment are not in order of any preference or ranking. Thus, feel free to take your pick. Each of these has unique features and will not disappoint you. Also, consider Sky Tech Lasers Nerf Pistols, information of which you can find online, to take your nerf battles to another level.

Choose this gun at once when you have no time to take cover from your opponent team’s dart rain on you. These guns are easy and quick to load, with fantastic accuracy and range. The make of the gun supports newer as well as older darts with it, which thus, leaves you with umpteen choices. Plus, this gun is inexpensive and makes for an excellent choice when a family nerf war is on your mind.

The biggest plus of the Nerf Modulus Tri-Strike is the hoard of accessories it comes along with. You can customise your gun and choose from a thousand different ways to use it. From its design to functionality, every aspect of the gun is under your control. Also, besides all those accessories it comes along with, the parts of the gun can themselves be used as weapons. Therefore, if you want to have absolute control of the war, the Nerf Modulus Tri-Strike is the best piece of weapon for you. It will put you on the winning side in no time.

You must get your hands on this piece of beauty if you are looking for range more than anything else. This nerf gun has a range of 100 m, which is a pretty significant figure. It also has excellent power and comes with a fresh look. However, it might misfire at times, which is why it is advisable to load the gun manually.

It has a brilliant firing speed, which is a factor that shall work in your favour because speed is all that matters when you have your opponents giving you hell. This gun is capable of firing five darts per second and thus, will require you to load its dart drum quicker than any other gun. Loading the weapon takes time, but you shall be in for some excellent dart firing experience once it’s done. You might find the price of the gun a little bit extravagant. But, it is a pretty good investment if you are really serious about your battles.

Rival Apollo XV-700 is where innovation meets nerf battles. Instead of dull darts, this gun shoots tiny yellow foam balls to enhance your experience with the gun. These yellow foam balls serve you more advantages than you can possibly fathom. They are little, but heavy, nevertheless. Therefore, they can fly better at the target than regular darts and put you in the winning spot almost immediately. Choose this one if you want firing accuracy and some decent creativity with your guns. 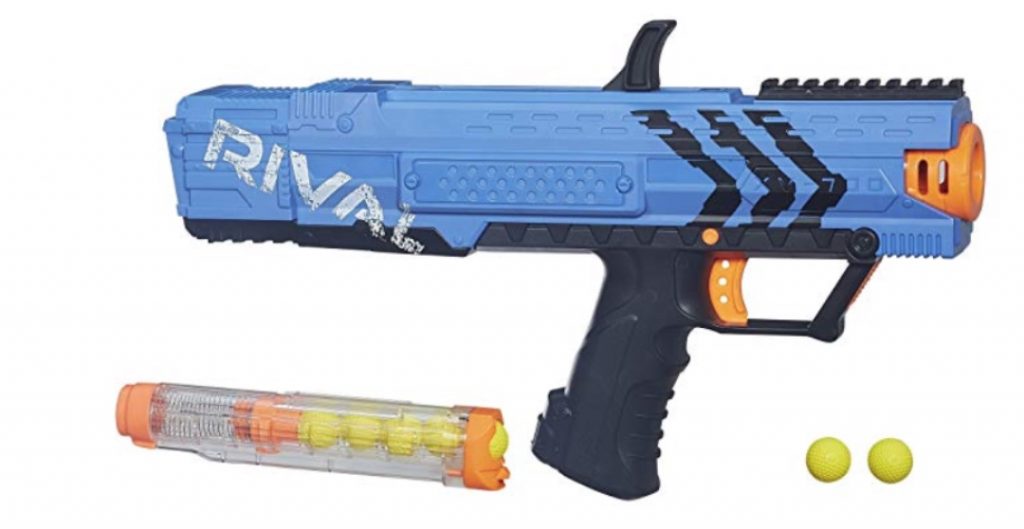 Nerf guns and nerf wars have been in vogue since the early 70s and for many good reasons. They are safe, practical and can be indulged in by people belonging to all age groups. There is no sinister intent of the game that messes up a child psychologically and pushes him/her towards heinous crimes. It rather, allows family and friends to come together and enjoy thoroughly, in any celebration or reunion.